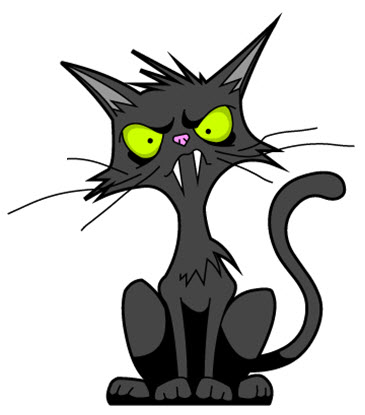 Have you ever seen a dog with head thrust out a car window just reveling in the breeze during a car ride? Ask any dog, “Wanna go for a ride?” and they know exactly what you mean and start going crazy happy in anticipation. Cats? Not so much; they are more like, “Screw the ride…got any treats?”

Ever try to put a large tom cat into a pet carrier that he has absolutely NO desire to be in?  It’s easy. [koff…]  Being a generous, sharing citizen, here are 28-easy steps I’ve documented based upon a true story that unfolded at our house Saturday morning. I cannot certify that these 28-easy steps will work for you, but there may be several learning moments revealed for your benefit as I recount the adventure.

His name is Monster. That should be your first clue; 10-pounds plus of year old tom cat. My wife rescued him off an on-ramp at a truck stop on I-74. The boy has had it hard from the get-go…so the “Force” is strong in this one.

He belongs to my stepson and had been visiting us and our other three cats over the Christmas holiday. Bob, Wesley and Lilly will not be sorry to see him make an exit, though Bob was a little concerned over the ruckus leading up to his departure…but I’m getting ahead of myself.

Saturday was Monster’s last day, and it was time for my wife to drive him home to Greenwood, IN. Like I said earlier, cats aren’t so much for riding in cars; especially, when seeing the pet carrier in your hand translates to, “We ARE going for a ride and YOU…the cat…have no choice in the matter.” In advance of ever even seeing the car, there is a direct correlation here – pet carrier = car ride. Solution options that surface in a cat’s brain? Flee. Hide. Fight.

Unfortunately, those three options are not actually discrete options; instead they represent a chain of escalation.

After numerous adventures in transporting Monster previously, I’ve managed to reduce the number of steps required to stuff his sorry cat ass into a pet carrier with no injuries to anyone and minimal property damage. Here’s all that is required:
(Quick hint: Stretch out a little first to prevent blowing a hammie...)

And there you go. No fuss. No muss. You’re welcome!

About five minutes after the car pulled out of the driveway I found something my wife should’ve taken with her. I called her mobile and when she answered…she was still laughing. I hope she peed a little more…

Training does not drive PERFORMANCE

Training only contributes to POTENTIAL

If sustaining PERFORMANCE is our goal we must go to ground zero...

...to optimize learning & support at POINTS-Of-WORK in the WORKFLOW

Our current Training paradigm can no longer keep pace with the velocity of business demand
and the continuous nature of change; especially when demand and change
both manifest exclusively at the Point-of-Work

The rules of engagement to sustain workforce performance have changed...
... so too must our strategies and tactics related to Training.
Our solutions should target specific, validated moments of need in actual workflows.

Are you ready to make the shift?

Are you at a state of readiness to adopt Point-of-Work Methodology?

Living in Learning Ranked as a Top Blog in 2022!