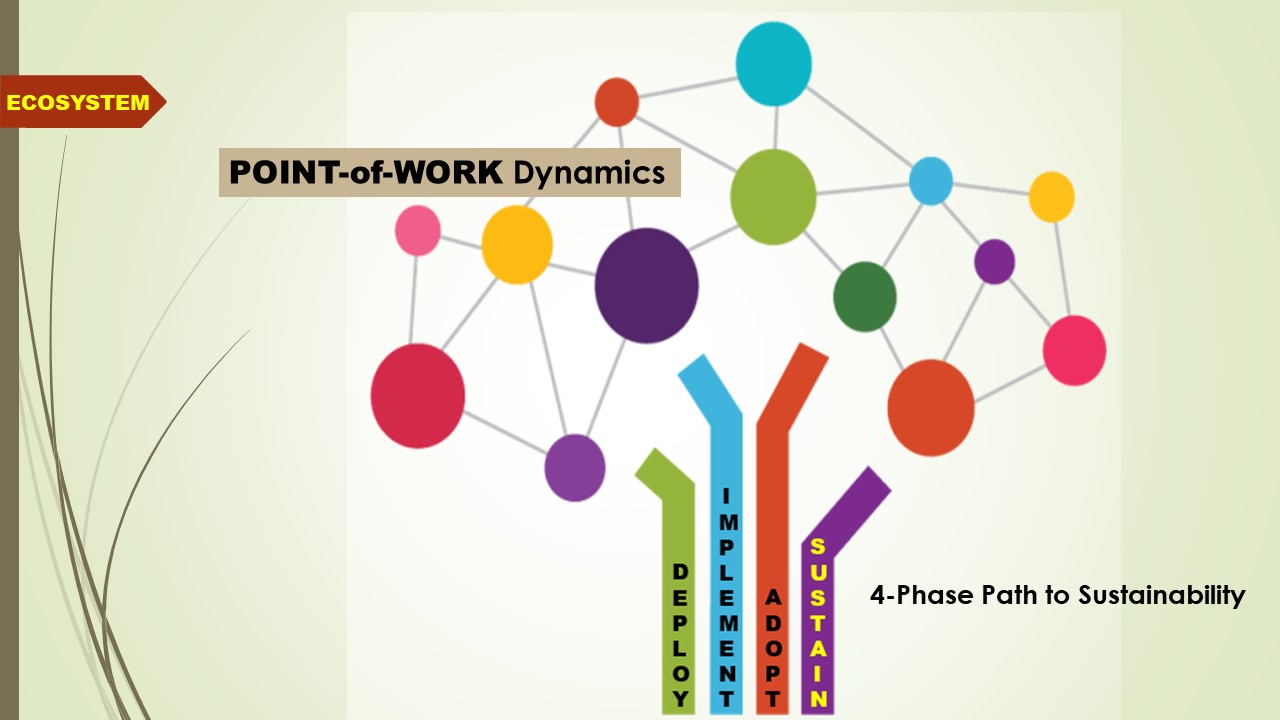 In my current coaching “gig”, I’m blessed with plenty of time to troll networking sites to read a diversity of thoughts and ideas shared by other L&D professionals. This morning I ran back through a thread of comments I’ve been tangled up in from an earlier post on my favorite topic and current passion – Point-of-Work. As is often the case, a question morphed into my head triggered by the increasing conversations of others lamenting why L&D is so resistant to Change…Change specific to adopting an evolved paradigm that keys on enabling workforce performance solutions that actually render performance outcomes. The common lament seems to be “Why isn’t training in all it’s innovations not delivering the results?”  That thread and others prompted the main question for me, “What if we stop trying to change L&D’s paradigm, and facilitate a new one outside of L&D?”

Once upon a time I had a boss, he was a die-hard bully, and had an aversion to every “what if” scenario put before him. His response was always swift and crude, “If my aunt had balls, she’d be my uncle!” That usually ended any “what if” discussions. Why share that crude remark with you? Because it’s an example of leadership refusing to look beyond what something different might look like. He refused to consider things outside what were known and proven…stuck in the comfort of an established paradigm.

Another boss in my past talked about our (L&D’s) dilemma in becoming more effective and blocked by only “admiring our problems” with no progressive action steps ever taken outside the boundaries of our existing paradigm. The funny thing about his statement, as spot on as it was, highlighted the problem of refusing to see beyond the conversations where the “admiring” was taking place and the refusal to consider innovative thinking to pursue change. Why share that little story? Because it feels like it validates my earlier question about the seemingly impossible effort to change a paradigm that resists change.

So here is my thought…Let’s not change L&D! Let’s facilitate change within the interdependencies that interface with it…the interdependencies that exist beyond the limits of our current state training paradigm where measurable business value is either generated, compromised or lost altogether – the Point-of-Work. I see this as a scope of work issue, and the expanded elements of scope live beyond the limits of our current state paradigm that hold current skills, tactics and technology.

This thought leads me to the dynamics of the learning performance ecosystem existing today in every organization. L&D is deeply entrenched within the “Learning” aspects of what it takes to optimize the viability of the ecosystem, and we do it well. No argument there. But it’s not enough. Learning does not directly translate into sustainable performance outcomes in and of itself at the Point-of-Work. True, we are now talking about workflow learning, but are we reaching far enough beyond learning and into the dynamics of diverse moments of need within those workflows to enable and sustain workforce performance…or are we just admiring it?

Every workflow contains one or more Points-of-Work characterized by multiple tasks and multiple roles to execute effectively. Certainly “Learning” is of value, but at moments of need…do Knowledge Workers need learning or something that enables Performance? Methinks the Performance aspect is what’s missing from the solutions we chase to resolve the problems and remain bent on admiring. So, what should we do?

My thinking has shifted away from the resistance L&D represents to where, why, when, and how badly Points-of-Work are compromised. Who owns that turf? Maybe the better question is “Who should own that turf?” I’m not convinced L&D, in its current state, can or should. This turf and the solution enablement should be manifesting at the Point-of-Work which incidentally is owned by the operational side of the business enterprise.

What if… there was an operational, business-oriented hit squad of Performance Ninjas who reported to a dedicated entity outside of L&D whose sole purpose was collaborating real-time with operational stakeholders to address performance deficiencies?

In a previous life I worked in such an entity.

I was Director of Sales Training in that life. Yes, I said Training…BUT the scope was not limited to training. Our little team was owned by Sales & Marketing. Our focus was quite simply to enable performance by the sales force to drive positive sales revenue. Period! The larger HR entity owned career development, performance management, and other L&D training functions outside of the operations of Sales & Marketing. We were dedicated to Point-of-Work for Sales, though this was before I added the label Point-of-Work…that’s where we lived, and it was our turf.

When the larger HR entity ultimately annexed our team, Point-of-Work quickly became Point-of-Contention because our methodology and the operational relationship with Sales did not exactly fit the priority parameters of the existing HR L&D paradigm. Our team lost momentum, our operational focus became diluted, the relationship with Sales performance degraded, and we lost our black Ninja pajamas. Four months later, I left what had once been an awesome job.

What if… L&D was left to do what it has already proven to be effective and continues to deliver training solution components with the addition of EMBEDDED assets identified to align with the dynamic learning performance solutions the Ninjas road map for them?

What if… L&D becomes the “factory” that produces solutions that fall within their skill sets, and the Ninjas wear a single hat of assessing Point-of-Work conditions and sources of productivity restrainers that accurately define what those “manufactured solutions” should be?

What if… we start with enabling a single Ninja as a proof of concept? I’ve only recently launched the Point-of-Work Assessment methodology and a recent client actually created a single “Ninja position” called “Performance Support Specialist” as a trial. The PWA effort proved to be successful. A routine training request for up-skilling the Field Technical Support team resulted in a Solution Road Map that revealed a number of Workflow & Process gaps; Environment & Culture misalignment from an OD perspective; numerous disconnects regarding Content & Resource accessibility including delays in flows, and compromised maintenance protocols. Actual Training became a secondary part of the original request trumped by an operational blend of solutions Road Mapped.

What if…  the individual chosen as the Ninja already possessed the operational business skills and can readily recognize performance problems and their causes? Should these individuals come from within the ranks of operational Business Matter Experts (BMEs) as opposed to L&D? I think it easier to teach a BME about learning performance solutions than teaching a L&D person on complex business acumen where there are so many moving parts and unfamiliarity of new knowledge gained by minimal exposure to the Point-of-Work being investigated. Ultimately, we are after skills that can shape a Solution Road Map that includes components that do not default to learning every time. Call them Ninjas, performance strategists, or performance consultants or whatever, but task them to address performance deficiencies at Points-of-Work.

What if… we take this reckless gamble a start a new paradigm outside L&D’s scope? Where does it end? Will there be a team of Ninjas reporting to Senior Ninja…who reports to a Director of Workforce Performance…who reports to a Chief Capability Officer? If success leads to that kind of adoption would there be any doubt that bottom-line dollar impact to the business justified it? I think not…

What happens when you hit an unmovable paradigm? Step back and admire it? Or ask a question like “What if… we leave the paradigm alone and start a new one that compliments what already works?”

Think about it…nobody seriously thought about man flying until two guys in a bicycle shop in Dayton, Ohio broke through that earth-bound paradigm and proved it could be done. Maybe we equip one Ninja already on the other side of the wall separating them from L&D and enable them to thrive in a new paradigm at the Point-of-Work and establish a new paradigm by breaking through with a viable proof of concept. Now that would be worthy of admiring…

Thanks again for reading. As always, I welcome thoughts, comments, ideas, and/or push-back as you are so moved.

Training does not drive PERFORMANCE

Training only contributes to POTENTIAL

If sustaining PERFORMANCE is our goal we must go to ground zero...

...to optimize learning & support at POINTS-Of-WORK in the WORKFLOW

Our current Training paradigm can no longer keep pace with the velocity of business demand
and the continuous nature of change; especially when demand and change
both manifest exclusively at the Point-of-Work

The rules of engagement to sustain workforce performance have changed...
... so too must our strategies and tactics related to Training.
Our solutions should target specific, validated moments of need in actual workflows.

Are you ready to make the shift?

Are you at a state of readiness to adopt Point-of-Work Methodology?

Living in Learning Ranked as a Top Blog in 2022!